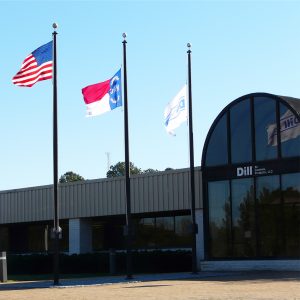 Dill Manufacturing was founded in 1909 in Cleveland, Ohio. In 1915, Dill began manufacturing tire covers for tire valves. These covers (known as caps today) were used on the Model T and eventually other vehicles. By 1924, Dill produced 4 million tire valve stems, 5.5 million valve cores a year as well as several tire covers. In 1925, Dill expanded into Toronto, Canada and one year later, opened a warehouse in Los Angeles, CA.

In 1955, Dill began production of the rubber snap-in tire valve. The snap-in revolutionized the passenger car market and the basic design is still used today. What later became named as Eaton Corporation acquired Dill in 1961 and moved the business from Cleveland, Ohio, to Roxboro, North Carolina, in 1964. The move to Roxboro was completed in 1969. While Dill continued to be the brand name of the products, Eaton named the business as their Air Controls Division in 1970.

Eaton continued to successfully operate the business in Roxboro, North Carolina, where the business continued to make new products for different markets and applications, including patents in the 1990s on innovative automotive air conditioning valves. In 2001, Dill participated in SAE committees to help create performance standards for tire pressure monitoring systems (TPMS).

In 2005, the division was sold by Eaton and Dill Air Controls Products, LLC was formed. The highly specialized equipment and machines were moved from Roxboro to Oxford, NC, into a larger building. In 2010, Dill pioneered the introduction of REDI-Sensor through a partnership with VDO. The revolutionary design allowed tire dealers to carry less inventory of replacement sensors and install sensors much faster than the competition.

In 2011, Dill in-sourced the production of air gauges and air chucks by setting up equipment and training new operators. The accuracy and durability was welcomed by automotive, commercial truck, and off-the-road vehicle operators and service technicians.

Leading Innovation in Fluid Control Since 1909